Ok. We’ve been here before. Yes, a little while back we compiled what we thought (at the time) to be a complete list of the  best Jersey Shore  BYOBs.   But, you know what we found out? We missed a bunch. There were just too many great places in  Monmouth County (and yes, Ocean   County too), that we not put our eating pants back on (taste testing is hard work), but we  also had to give each county it’s very own list.  Read more...
​

Via45
When Via45 first opened, it was hard to book a table, now 8 years later, you would still be smart to reserve your spot ahead of time. Partners Claudette Herring and Lauren Phillips have made it their prerogative to actually serve seasonal cuisine in a warm and cozy environment. The dishes are fresh, homemade, and always changing (so be sure to bring a bottle of red and white just in case!) 45 Broad Street, Red Bank 732-450-9945 www.via45.com/

​   This restaurant, Via 45, is run by two women who prepare each dinner to order (no premade

sauces simmering on the stove; everything in the     kitchen is in a raw state) and who change

their menu every day according to whatever they find at the market (the menu, too, is all quaint  and  homelike, hand-written

and often accompanied by doodles and daily quotes).  Read more...

Via45 Redefines the Family Dining Experience
By Teresa Politano | The Star-Ledger |  March 29, 2010 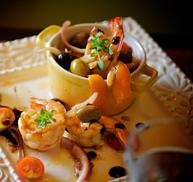 A Local’s Guide to Red Bank Restaurants: Where to Eat and Drink in Red Bank! 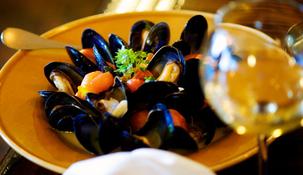 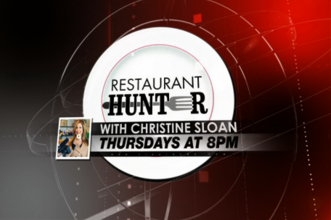 ​USA BATTLES FRANCE | A GOURMET MEAL & WINE PAIRING IN RED BANK
Those lucky enough to be present at the farm to table meal on August 20th at Via45 Restaurant, located on Broad Street in Red Bank, witnessed the battle firsthand.  Led by New York Vintners Consulting president and wine expert, Perry Porricelli, the attendees sampled nine wines paired with exquisite dishes prepared by chefs Lauren Phillips and Claudette Herring of Via45.  The feud was between wines from the Bordeaux region of France and a selection of reds from the Napa Valley in California.
The evening began with caciocavallo, a cheese from Southern Italy, served with artichoke hearts, dandelion hearts, and fresh figs drizzled with a light white wine dressing.
The appetizer was a chicken and apple sausage paired with garbanzo beans and baby bok choy flavored with Moroccan spice.  This course was complemented by two wines: a Californian Syrah-Grenache blend and a Bordeaux from Saint-Emilion.  Guests sampled the two while Porricelli explained their characteristics and nuances.  Next, the pasta course: spiral-shaped pasta with a spicy aglio e olio (garlic and oil) sauce with red peppers.  Again, the guests tasted two wines: a Cabernet Sauvignon and a Bordeaux from Haut-Medoc.  The main course of sliced tenderloin of beef with roasted corn and Aleppo pepper was paired with a Cabernet Sauvignon-Merlot blend and a Bordeaux from Pauillac.
The perfect end to a perfect meal came in the form of a ripe plum tart served with creme anglaise.  Accompanying dessert was another Cabernet Sauvignon-Merlot blend and a Bordeaux from Saint-Julien.
So who won the battle?  Everone who attended.

Monmouth: Via 45, Red Bank
Sure, there are bigger and better-known Italian restaurants in Red Bank, much less Monmouth County, but I'll go with Via 45, a cute, charming "rustic Italian'' eatery. The menu is compact and ever-changing; try the calamari (yeah, I know, the most cliched Italian dish ever, but it's really good here), the pork chop Milanese or any of the pasta dishes.

​An Oasis That Defies the Season
A Review of Via45 in Red Bank
By DAVID KOCIENIEWSKI APRIL 3, 2014.

The word jumped off the menu, as unexpected and inviting as a bonfire in a blizzard: watermelon.
At a restaurant in New Jersey, in March. Near the end of a long, cruel winter.
It’s the kind of audacious move that could end in either disappointment or delight, and it says a lot about the mind-set of Via45, a rustic Italian restaurant in Red Bank where simple preparations place a heightened emphasis on the freshness and quality of ingredients.