For Claudette Herring and Lauren Phillips, Via 45 is the way to “anything possible.”
Neither woman set out in life to own a restaurant, but their paths led these

food allergies and other dietary concerns.
“We just wanted to create a place where people can come, sit and share their

stories,” Phillips said. And almost four years later, “we still say that.”
Herring, the daughter of an American serviceman who married an Italian woman

while stationed in Italy, was born and raised in Trieste, Italy. She grew up watching

her mother visit the markets each day to buy fresh food for dinner, but she was not

lured into the kitchen to help prepare the family’s homemade meals.
“My mother tried to get me in the kitchen all the time, and I said, ‘I’m not cooking   for anyone,’ ” Herring recalled with a laugh.

Once she started cooking, her mother’s influence came shining through.  “I was brought up with a lot of different flavors,” she said. “My mother had  us try everything, and I began to have a palate for everything.”  Herring’s military family moved several times before settling in Jackson, just in time for  her to attend high school there.
Herring, 57, worked mostly blue collar jobs, operating a fork lift and loading trucks in warehouses. She got a taste of food service by working as a  breakfast cook in her 20s, but restaurant life didn’t begin to appeal to her until she was almost 37. Herring was managing a salon next to an Italian  restaurant in Somerville when she talked to the chef about a career change. He suggested she work for him for a day, and she agreed.
“There was not a thought process,” Herring said.
Herring spent five years at that restaurant, La Cucina, working her way up from prep cook to overseeing the pasta station. She moved on to a few  more restaurants —including Alfonso’s Italian restaurant and pizzeria in East Brunswick, where she had her first chance to be head chef — over the  next six or seven years.
She opened her first restaurant, A Tavola in Old Bridge, in 2001. It was there that she met Phillips, a customer who became a friend.  Phillips, who  grew up in a Jewish household in Brooklyn, studied modern dance in college and danced professionally for about five years. She eventually married  and raised two children in Manalapan while working as a masseuse.
Phillips, 55, said she enjoyed cooking for the holidays, but did not consider it as a career option until she brought some of her baked goods for  Herring to sample.
“Claudette said, ‘You’re going to do that for me someday,’ ” Phillips recalled.
Herring closed her restaurant after five years and took over Vivere Ristorante at the Grand Victorian Hotel in Spring Lake for the next two years.  Herring asked Phillips to make biscotti, muffins and other breakfast treats for the guests. By spring 2006, Phillips’ role expanded to include making  desserts and cooking on the line.  Herring told Phillips that she needed to hire someone for this busy kitchen and offered Phillips the job.  “I really  wanted to do this, and I didn’t want anyone else to be there,” Phillips recalled. “It was exciting and interesting and fantastic.”
Phillips said it wasn’t long after that she stood on the front porch of the oceanfront inn and decided that they would have their own restaurant one  day. The feeling was “so strong,” she said.  Vivere could not sustain a year-round business, so the women began to look for their own place. They  borrowed from friends and family to open Via 45 at 45 Broad St. in Red Bank. They opened during an economic slump, just before Mother’s Day 2009,  with handwritten menus just as they have today.
At first, Herring thought she’d change the menu once a week. It now changes daily, with about 16 suggested items below the words and “the way to...”
“Anything is possible is the garden,” Phillips said. “I don’t know where this will take us. It has it’s own organic path.”
The women, whose friendship eventually blossomed , decided to design a restaurant that felt like Herring’s childhood, with “farmhouse country”  colors and foods and the relaxed attitude of Italy.  Phillips’ past is also represented on the bookshelves in the form of black-and-white photos of a  graceful young dancer.  “It was about creating a place where you belonged and could be who you are,” Herring said. “It’s about the pure enjoyment of  food and being together.”
The pair built a reputation for offering gluten-free, vegan and vegetarian dishes. Phillips experimented with ingredients until she came up with  recipes that allowed everyone to safely enjoy their food at the same table.
They estimate 30 percent of their customer base has a food allergy.   Most of their menu offerings has a gluten-free alternative.
Herring said Via 45 is proof that staying true to her path is what makes the restaurant — and their lives — work.   “We’re still here,’ she said, “and  we’re grateful for the people who come.”   Phillips said she thinks they have created something “different” at their restaurant and she hopes people  embrace that.   “I feel alive,” Phillips said. “I went from making reservations to taking reservations.” 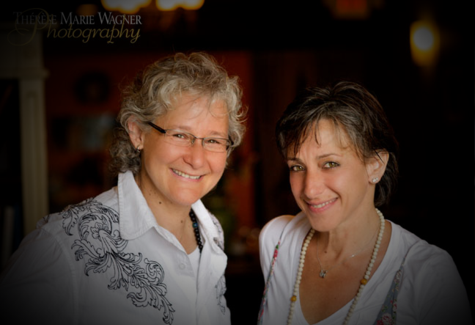